We all know that brown rice is healthier than the white rice! But do you know the difference?? 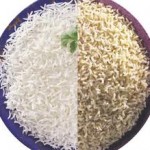 Actually The nutritional differences between brown rice and white rice are not as dramatic as many people think!

Personally I’m not picky regarding that, I eat white rice most of the time…

White rice is converted to brown rice by removing the bran and the germ as well as fiber, vitamins and minerals from the brown. That’s why most of the white rice is enriched with the missing vitamins.

Both have about the same number of calories (around 200 calories for a 1 cup of cooked rice). Both brown and white rice are a good source of thiamin and niacin. As said before, white rice is often enriched with the most important missing vitamins and minerals such as iron, folate and B vitamins, although brown rice rarely is not!

Brown rice on the other hand, has more magnesium and selenium. But the biggest difference is that brown rice has more fiber! It has 4 grams per cup while white rice has just 1 gram of fiber per cup.

Brown rice can also be a great option for diabetic people as it has a lower glycemic index than the white rice. Glycemic index food are slowly absorbed in the bloodstream and therefore won’t increase your blood sugar level.

Brown rice should also be consumed to lower high blood cholesterol levels as it contains the bran oil which has cholesterol-lowering benefits.

So, in conclusion, people with health problems should definitely go for the brown rice, but for those who think that brown rice will make you lose weight, then you should think twice about it! 😉