I was in Sharm el Sheikh this weekend…

I noticed something about the mineral water there! (Although it’s my third time there!) 🙂

I think I am very picky about the water I have! ( I admit it!)

I always look at the sodium content of the water I wanna drink!

I mention before that I switched to  Tannourine water because its low sodium content. (only 4 mg of sodium/ L)

I wonder why the water there is full of sodium! Maybe because it is a dry country, maybe because it is so hot and sunny all the time that people get dehydrated and loose some minerals from their bodies… I really donnow why!

But every time I was drinking that water, I was feeling thirsty and that I wanna drink even more!

In Kuwait, the highest sodium content I ‘ve seen is 22 mg/ L and I find it  a looooot!!

But the water there is even worse! 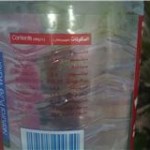 It doesn’t really show in the picture!

It was the only water served in the hotel and in some restaurants. Plus we were not allowed to bring other water bottles from outside.

I felt so bloated  the whole trip (besides the seafood we ate)… So basically everything was full of salt!

Although salt doesn’t have calories but it causes water retention, and makes me feel uncomfortable..

So please always check the sodium content of the water, too much and too low sodium content are not  healthy for the body, the skin, kidneys and for hypertensive people!

It is the main reason for  cellulite development!