Well that food choice might not be so healthy! But to tell you honestly  it’s been a long time I didn’t have it and was craving for it!!

But do you know that “zaatar and spinach manousheh” can be the healthiest choice we can do among all the other kinds!?

Yes!! It is surely less fattening and healthier than the cheese or labne manousheh.

When I say healthier, I mean less in saturated and Trans fatty- acids which are cholesterol enemies!

Full- fat labne and cheese are loaded with cholesterol and animal fat, as well as in calories, unless you can make it at home using the zero fat versions 🙂

Talking about the “zaatar manousheh”, I only had  half of it.. 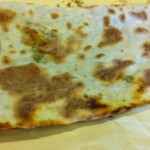 According to the food exchange list, half zaatar manousheh is considered as 2 exchanges of carbohydrates and 1 exchange of fat.

It is not that bad to enjoy our favorite food from time to time..