We’ve been always told to increase spinach consumption so that we become strong and energetic! 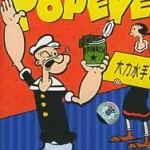 And a lot of children have been forced to eat spinach because it gives them power, exactly like Popeye!!

This is what I usually hear:

“I am vegetarian and I suffer from a severe anemia, I am now taking iron pills and increasing iron- rich plant proteins like lentils, broccoli and spinach…”

How much is this true???

Long time ago people used to think that eating spinach will cure anemia because of its high content of Iron.

In fact, Dr. E von Wolf publishes in 1870 a work that claims that spinach has ten times more iron then other green leafy vegetables.

But unfortunately  the figure was wrong and the decimal point was placed in the wrong place.

Spinach contains oxalic acid which binds to Iron and inhibits its absorption. So like coffee and tea, spinach is considered another inhibitor of iron absorption!!!!

The presence of oxalic acid in food is said to prevent absorption of calcium and iron.

Poor Popeye!! You ‘ve been eating spinach for nothing!!

But that myth doesn’t say that spinach has no nutritional value.

Spinach is one of the most nutrient packed vegetables and its raw juice is also an excellent source of chlorophyll.

It is a great source of vitamin A, B, C, E, K, Carotenes, folate, manganese, iodine, magnesium, phosphorus, potassium, some trace elements and many valuabe amino acids.

Spinach contains 13 different flavonoids that work as antioxidants and also as anti-cancer agents.
Folic acid  is a vitamin and is needed to make new cells in the body, including red blood cells.
Lack of folic acid will cause anemia, and sometimes other symptoms.

This is why we hear that green leafy vegetables are excellent for the blood. And maybe that’s why we hear that consuming spinach is a cure for anemia!
So for the readers who are lost!
As I said, folic acid is needed to prevent anemia.
Spinach is rich in folic acid, but it is also rich in oxalic acid that inhibits iron absorption in the body.
So if you suffer from anemia or iron deficiency, it is best to increase folic acid consumption from other green leafy vegetables like broccoli, sprouts, beans and asparagus.
You can aslo eat spinach with other iron- rich food for maximum iron absorbtion (spinach + red meat, spinach + lentils)
Pregnant women should increase folic acid intake to prevent fetus development problems!