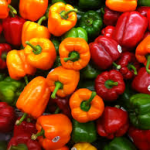 was shopping in the supermarket and was attracted by the multi- colored bell peppers! I directly thought of writing an article about that although peppers make me feel bloated and I eat it in moderation!

Although the most common bell pepper is the green bell pepper, bell peppers can be found in rainbow colors like orange, red, yellow and purple! Regardless its colors, there are plenty of reasons to introduce them into your food regimen!

– All peppers are a good source of Vitamin K, which is extremely important for bones health.

– All  peppers are an excellent source of vitamin A and C, two very powerful antioxidants that may help to reduce risk of cardiovascular diseases and several cancers. Plus Vitamin A and C work well for both fat burning and immunity system.

-Red bell peppers contain both lycopene which reduces the rate of some cancers and beta-cryptoxathin which is a ceratoid that also lowers the risk of certain cancers. It also has more Vitamin C than oranges and are high in beta-carotene.

– All peppers also contain 110 grams of water, essential for fat burning success and cleaning your system!

– Peppers are an excellent source of Vitamin B6 and folate, which are extremely important for pregnant women, as well as a stress relieve!

Note!!!  As a bell pepper ages, its flavor becomes sweeter and milder. So the ripeness determines the flavor and color of each pepper. For example, red peppers are simply a mature green one! Plus they contain 10 times more beta-carotene than green peppers!

Get the most of bell pepper health benefits by eating them as fresh as possible, when adding it to your salads, or even eating it as raw sliced  sticks with some special dip like yogurt, labne or hummus 😉

Here is an old article about  black peppers spices!