One of The Cases!

This post is to explain to you one of the cases I’ve seen.. The scale doesn’t always show the real facts of  your body!

It is a an example of one of my patients measurements (after only 10 days)  which seem quite interesting! 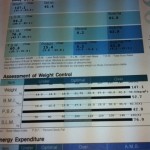 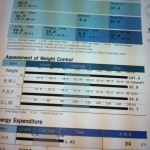 As you can see, weight increased by 0.5 kg!! (Although I can tell from the look that he lost a lot!) In fact a lot of people feel that they’ve lost a a lot of weight although it doesn’t show on the scale!!

What matters is the fat mass! This is what I always look for!

Water mass went up to 64.8 kg so this person suffers from severe water retention! It is mainly caused by high consumption of sodium and/or not drinking enough water!! To flush out the extra water from our system, we need to consume 2 glasses of water before every meal and we don’t have to add salt to the food! Mr X, is now on a low salt diet!

Losing fat mass is the most important and harder thing! It needs patience, constant time and suitable food for everyone!

Going back to the picture, you can also see that the Waist to Hip Ratio  has decreased by 2 factors which are equivalent to 4 cm!

As I told you before, muscle mass went up, that’s why the Metabolism is faster now! The more muscles you have, the higher is your metabolim!!